Throughout human history, fraud has been ever-present and ever-evolving, as bad actors were never short on greed or imagination. In today's world, financial fraud is multifaceted, with broad titles including tax evasion, money laundering and terrorist financing, misappropriation of funds, bribery, procurement fraud, corruption, and cybercrime.

The digitalization of information and the increasing complexity of modern technology have helped financial fraud to thrive and mutate, with financial criminals nowadays better equipped than ever to disguise their identities and commit immoral actions. Digital currencies have made it increasingly difficult to track cross-border cash flows. Weaknesses in cybersecurity controls have allowed high impact data breaches, which facilitated fraudulent activities committed with stolen personal data. Emerging threats such as attacks powered by artificial intelligence will present a new series of risks.

In business terms, the cost of fraud is financial loss – which negatively affects a business’ productivity, reputation and ability to generate revenue. Fraud, especially when serious or repetitive, can undermine trust and create crises of confidence – a lethal combination particularly for the banking sector. Prominent large scale examples of corporate fraud include Enron, Arthur Andersen, Bernie Madoff, and many others.

Fraud is rampant in our region of the world. Roughly a third of financial organizations in the Middle East, surveyed by PWC, have reported being subjected to cases of fraud between 2016 and 2018, with costs ranging from $100,000 to $50 million per organization. More than half of fraud cases in the MENA region were attributed to asset misappropriation, mainly by employees or senior managers, with cybercrime accounting for another third, and the rest credited to procurement, bribery and corruption.

Globally, both the public and private sectors have set up regulations aimed at combating financial crime. Compliance programs within banks in the Arab region are notably abiding by the recommendations of the Financial Action Task Force (FATF) to combat money laundering and terrorism financing, as well as those of OECD's Global Forum on Transparency and Exchange of Information for Tax Purposes. Financial institutions deploy continuous efforts to enhance their authentication techniques – through biometrics or otherwise – to prevent criminals from illicitly using compromised data to open new accounts or access existing ones. Laws are promulgated and enacted to strengthen cybersecurity against data breaches, notably the EU’s GDPR, and introduce new requirements for authentication and transaction monitoring for payment processors.

Compliance budgets in the MENA region have now matched global figures, with more set to be spent in the future. Many countries in the region have established robust financial regulatory authorities, such as the Dubai Financial Services Authority (DFSA) or the Financial Services Regulatory Authority (FSRA) in the United Arab Emirates, and the Special Investigation Commission (SIC) in Lebanon, and have also set laws aimed at defining and penalizing financial crimes, notably in the UAE and Lebanon. Noteworthy here that Lebanon thoroughly complies with a large set of international regulations such as the :

In Lebanon, a specific Financial Prosecutor is assigned the tasks to instruct and enforce financial offences and crimes.

7 Arab countries have signed the Multilateral Competent Authority Agreement (MCAA) which establishes compliance with OECD's Common Reporting Standards (CRS); the remaining countries are in the preliminary process that would pave the way for joining the Agreement in the future. The region also saw the establishment of robust compliance groups, notably the MENA Financial Crime Compliance Group (MENA FCCG) – comprised of 13 Arab banks, in strategic partnership with the Union of Arab Banks – to prioritize the fight against money laundering and the financing of terrorism.

Yet one of the main facets of financial fraud that remains elusive – and one that adds significant cost to doing business in many developing countries – is corruption.

In terms of corruption, our region is no stranger to this vice, with 19 out of 21 MENA states scoring below average on the Corruption Perception Index and similarly so on The World Bank’s Worldwide Governance Indicators.

From another angle, and in the wake of the Arab Spring of 2011, interest in tracing illegal assets and asset recovery gained prominence in our region. A partnership between the World Bank and United Nations Office on Drugs and Crime (UNODC), the Stolen Asset Recovery Initiative (StAR), helped recovery efforts in an attempt to install an era of greater transparency in Egypt, Irak, Tunisia, and Libya.

StAR helped return $28.8 million in funds from Lebanon to Tunisia in the end of 2012, after the toppling of Zein El Abidin Bin Ali, by facilitating contacts between Lebanese and Tunisian authorities and building Tunisia's capacity to prepare requests for assistance. Physical assets valued at approximately $58 million were also returned to Tunisia from France, Italy, Spain, and Switzerland. Recovery of assets in Tunisia from other jurisdictions is still ongoing. Similarly, StAR helped recover nearly $150 million from the Netherlands to Libya in 2011, after the toppling of Muammar Gadafi, and the funds were used by the WHO to distribute medical supplies that were direly needed in Libya; further asset recovery cases are ongoing. Cases are ongoing as well with regards to asset recovery in Egypt and Sudan following the toppling of Hosni Mubarak and Omar el Bachir.

Asset recovery is a complex process. Tracing stolen assets is also an arduous task since money can easily be stashed in art, antiques, jewelry – all of which are portable and difficult to trace. The use of offshore vehicles and digital currencies requires creative asset tracing processes, in addition to the use of frameworks – such as the one for anti-money laundering – in the freezing or seizure of assets, as well as achieving a higher standard of international cooperation in both the investigative and legal proceedings related to fraud.

Multiple tools to combat corruption exist, but they all depend on a strong and united political will to invest in higher levels of transparency in the Arab countries. A starting point would be to reform fiscal institutions and laws, and allow external audit agencies – and the public at large – to provide effective oversight.

Fighting corruption also goes beyond reforms. Investing in Education and spreading Transparency and Anti-Fraud awareness is an important means to turn the tide against corruption, as it propagates ethical values, informs people of their rights and duties, and encourages them to actively take part in political life – thereby demanding better standards of governance, transparency, and accountability from their respective governments.

In conclusion, assets lost to corruption can – and should – be recovered. Financial criminals must be pursued in accordance with applicable laws, to reinforce economic stability and the well-being of people.

Thank you for your attentive listening. 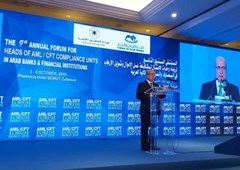 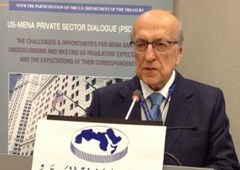